Train 303.  What significance does that number have?  Obviously the train could not have been that important, or it would have had a name.  I first took note of its existence, there in a B&M public time table, amidst so many other seemingly equally important, or unimportant, train numbers and schedule times.

The B&M Public Time Table for September 28, 1930, has the following schedule for Train 303, running daily except Sunday:

The notion of a Pullman car in a local at Suncook struck me as something worth modeling, in fact, requiring modeling, as I model the Suncook Valley Railroad in the fall of 1930 (and 1952.)  After B&M passenger service over the Suncook Loop was curtailed in 1935, due in part to the poor condition of the Hooksett covered bridges, the schedule was changed so that the train stayed on the west side of the river between Hooksett and Bow Jct.

Research has given a glimpse of what sort of power was assigned to Train 303 over the years.  Because the train passed over the Suncook Loop's poorly maintained wooden bridges in Hooksett and Suncook, it was limited to the equipment that those bridges could safely carry.  Employee Time Tables indicate that the heaviest locomotive allowed on the Loop was J-1 4-4-2's, however, 303's slow schedule did not require the capabilities of such an engine.  Consequently, it is likely that the B&M regularly used their common 2-6-0's in this service, and some evidence exists to suggest that this was the case.  According to the 4/86 Bulletin, B-15c 2-6-0 #1475 was used to pull 303 from Boston on 12/29/1934.  After service over the Hooksett bridges was curtailed on January 11, 1935, the B&M was able to assign heavier engines to the train capable of handling any and all cars required, and the B&M's heavy P-4 4-6-2's appear to have been commonly assigned.  Indeed, the B&M's 9/26/48 Run Book called for a P-4 to be assigned to this train 6 days per week, with the crew returning to Boston on Train 316 (with the same locomotive.) 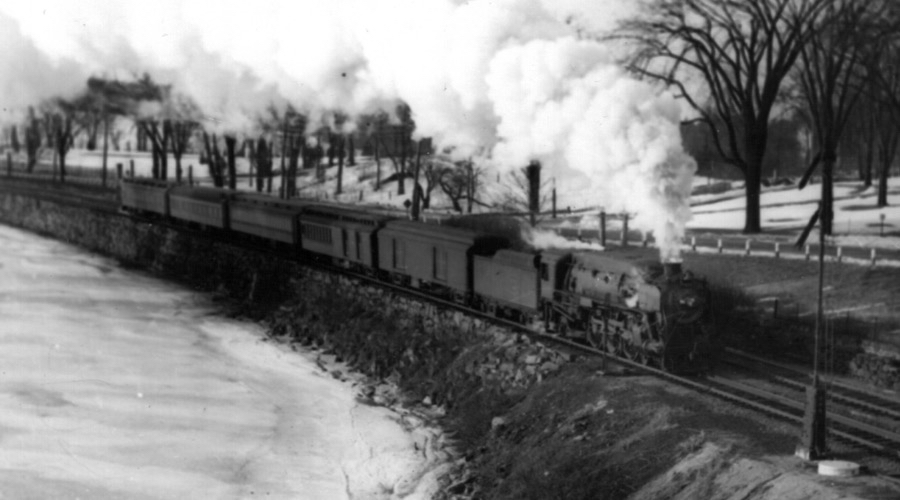 Some further information concerning the equipment used to make up Train 303 is available from the passenger train consist lists published by the B&M.  These lists laid out what the typical consist would be for the various normally scheduled passenger trains.  For example, the consist lists indicate that, from 4/27/41 to 4/26/42, the train required the following cars, at a minimum: express car, combine and air conditioned coach (to be returned to Boston in Train 320,) two coaches dropped at Billerica Shops, and the aforementioned sleeping car.  The same consist was specifed by the 6/20/47 consist list.  Furthermore, the 9/24/50-51 consist book show the following requirements: express car, 2 door combine (returned in Train 316,) a former C&O coach, the two Billerica coaches, and an extra coach Wednesday and Saturday.

The photographic record sheds additional light on the Train 303 service that largely supports and confirms the information contained within the consist lists and run book.  Al Hale photographed Train 303 on 3/16/40 at Tyngsboro, MA, pulled by P-4 3710 (or 3719?)  The consist was: 8+8 wood baggage car, 4+4 combine, Osgood Bradley high window coach, with two Pullmans on the end.  Both appear to be 12 section-1 drawing room cars.  Volume 20, Number 3, of the B&MRRHS Bulletin showed another P-4 pulling the train at Boston sometime in the 1940's.  An Al Hale photo of P-4 3712 taken 5/12/50 at Concord shows an Osgood Bradley light weight coach, a 4 door baggage car, a 4 door Osgood Bradley high window combine, a former C&O coach and Pullman Orchard Gardens making up Train 303.  Yet another of Mr. Hale's photos, from 4/17/51, showed 3712 at Wedgemere pulling Train 303 with..., and on 4/27/1951 Mr. Hale was at Winchester shooting 3717 at the front with a two door ex-troop sleeper baggage car, a 4 door steel baggage car, a 4 door steel combine, an ex-C&O coach, and two Pullmans.

From 9/25/1927, when 303 was first inaugurated, until November 14, 1930, this train also picked up a milk car (typically B&M 1635) from the Suncook Valley Railroad, bringing it the rest of its way to Concord, before the car itself would head to the Manchester Dairy System.  The train also required mail capability in order to accept mail from the SV train until 1935, when service via the Suncook Loop was discontinued.  A Railway Mail Service publication from 9/28/30 specified the following space requirements for a closed pouch service: 30'- Boston to Winchester, 18'- Winchester to North Billerica, 15'- North Billerica to Lowell, 12'- Lowell to Nashua, 9'- Nashua to Manchester, and 6'- Manchester to Concord.  Half of a baggage car would be sufficient for this requirement.  By 5/15/52, this requirement had changed somewhat: 15'- daily except Saturday and Sunday, Boston to Lowell, 15'- daily except Sunday, Lowell to Nashua.  Train 303 was discontinued (according to a photo of GP-7 1563 located at the BHS,) on 7/18/55.

Train 316, the Uncanoonuc, was an afternoon southbound Concord to Boston passenger run that served as 303's counterpart.  By looking to that train, we can further validate some of the information given above.  316 served Rumford Press, a large publishing company in Concord who printed many magazines, journals, year books, and other periodicals for national distribution.  This service required rather different equipment than the typical commuter, suburban, and intercity passenger trains seen elsewhere on the system.  While the consist list dated 4/27/41 indicates a more common group of cars, including an RPO/baggage/express car, a combine, 2 AC coaches, and an extra coach on Saturday, the 9/28/41 consist list added the requisite mail storage car, to handle the printed material business offered by Rumford Press.  Carlton Parker photographed the train on 4/12/47, with 3701 on the point, with 4 baggage cars among its 14 car consist.  The 6/20/47 B&M consist list shows that was expanded in the post war-period to include: storage mail car(s) for Rumford, an RPO-express-baggage car, a smoker, and three coaches.  Two additional steel coaches were to be added to the train at Manchester on Wednesday and Saturday.  Al Hale caught the train on film on 1/20/48 at Nashua, as P-4 3715 hauled a B&M 4 door baggage car and other cars south.  It comes as no surprise that the 9/26/48 Run Book shows a P-4 assigned to the run.  Al Hale shot 3714 on 303 two more times at Nashua in 1950.  On Jan 7, the consist included a 4 door ex-troop sleeper baggage car, while later in June, the train included both an ARA steel express boxcar (probably a PRR X29,) and another 4 door ex troop sleeper baggage car.  Dwight Smith photographed the train at Concord on 1/13/51: 3714 pulled a steel 4 door baggage car, an ex-troop sleeper baggage car, both a steel 2 door combine and a steel 4 door combine, and 4 steel coaches.  In Nashua again in April 1951, Al Hale found 3714 once again pulling Train 316, this time with a 2 door ex troop sleeper baggage car.  B&M: Forest River & Mountain shows what I believe to be Train 316 in Concord on 4/27/52 pulled by GP-7 156X.  In the train, one can see a baggage car, RPO, smoker combine, and at least 2 coaches.  My speculation is based on the angle of the sun in the photo, plus the 9/24/50-51 consist list: baggage car, RPO/express car, smoker, two coaches, an AC coach, and an extra coach on Wednesday and Saturday.  A Railway Mail Service publication dated 5/15/52 recorded that a 60' car for closed pouch mail service was required.  Trackside-East of the Hudson and Trackside-Around Boston both have photos of GP-7 1563 pulling 316 in August of 1952. The consist from the locomotive back was as follows: a 2 door B&M ex-troop sleeper baggage car, an ACL rebuilt USRA express box car, two more 2 door B&M ex-troop sleepers, two unidentified ex-troop sleepers, yet another 2 door B&M ex-troop sleeper, a 4 door baggage-smoker and a heavyweight coach.

The last steam train to run out of Concord was Train 316 on 11/13/53.  Dwight Smith's photographs of the train, one of which was published in FR&M, show P-2 3643 taking on the task, with an ex-troop sleeper baggage car, a wooden 6 door baggage car, an ex-RDG combine, and at least three steel coaches.  I would also speculate that up until this time, this pair of trains was pulled by a steam locomotive, as it operated from Boston, where the required facilities were still maintained, although sometime between 1951 and 1953, a transition occurred to the use of a GP-7 diesel.  In contrast, the other New Hampshire Division trains that through to northern points had been dieselized rather somewhat earlier.

I would appreciate anyone sharing with me additional information, citations, and images they may have regarding either of these trains.